Lyme Disease Risk Rising in Wisconsin"After a rheumatologist suggested her problem was psychological, Haugen found Hoffmann, the Waupaca doctor. In fall 2009, he diagnosed her with Lyme and started her on antibiotics. She took various combinations of the drugs, sometimes intravenously, until last December. She’s finally feeling better and runs the Madison Area Lyme Support Group. 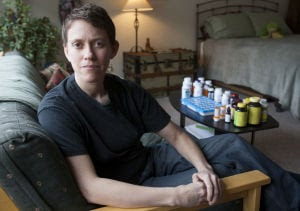 Della Haugen, who said she continues to have complications of Lyme disease after contracting it five years ago, runs the Madison Area Lyme Support Group. She’s pictured at her apartment in Madison.
(4) More Photos
Three years in a row, after clearing brush at a camp near Richland Center, Carl Houtman developed body aches, joint pain and a fever.
He took antibiotics for Lyme disease and the symptoms went away.
This week, when Houtman prepares the grounds at Camp Woodbrooke, he’ll bring antibiotics to prevent the illness if he’s exposed to the ticks that carry it.
“Lyme is not something you want to mess with,” said Houtman, 52, of Madison.
It’s becoming harder in Wisconsin to escape Lyme disease, a bacterial infection that typically causes flu-like symptoms and a rash. If not treated promptly, it can lead to arthritis, meningitis, heart problems and other complications.
Once confined to the western part of the state, Lyme now is in every county. More than 3,600 cases were reported statewide in 2011, double the total from five years earlier and one-tenth of what health officials believe is occurring. The 2012 figure isn’t available yet.
The deer ticks that carry the bacteria were found in Madison for the first time in 2011, meaning city dwellers also are vulnerable.
Meanwhile, a controversy over treatment continues. Most doctors say a short course of antibiotics clears up most cases, but others say chronic Lyme patients require the drugs for years. Yet long-term treatment can cause other medical problems, the first group says.
The Wisconsin Medical Examining Board in 2011 suspended the license of a Waupaca doctor who says he treats Lyme patients with long-term antibiotics. Patients say the board targeted Dr. J. Gregory Hoffmann because of his treatment of Lyme, but the board cited other reasons.
Lyme cases typically surge in April and May, with most cases reported in June and July. Health officials urge people to apply insect repellent, wear long pants and long sleeves when in the woods, and check their bodies for ticks afterward.
That can be a challenge. Officials say the ticks need to be attached to the skin for at least 24 hours to transmit the disease, but the nymph stage of the deer tick — which appears to cause most human disease — can be as small as a poppyseed.
“Even after you take a shower, it could still be crawling on you,” said Diep Hoang Johnson, vector-borne disease epidemiologist with the state Department of Health Services.

Lyme is still thought to be on the rise in Wisconsin — which along with Minnesota is the country’s main hotspot for the disease after the northeast — but reported cases could drop this year because of a change in how the disease is tracked.
The state health department said last June that cases don’t have to be reported unless the patient has the characteristic bull’s-eye rash. The rash is found in about 70 percent of cases, so 30 percent might now go unreported.
Local health departments were spending a lot of time investigating positive tests, only half of which turned out to be substantiated cases, Johnson said. The blood tests can produce false positives and false negatives.
“It was taking time away from other work,” Johnson said.
Rash cases still will show trends, she said.
In Madison this year, teams organized by UW-Madison entomologist Susan Paskewitz will look for places where deer ticks are most dense and plan efforts to suppress the populations.
Periodic searches in Madison in the 1990s and 2000s found no deer ticks, but students discovered them at Wingra Park in 2011, Paskewitz said. More ticks were found that year at the university’s Arboretum.
Last year, ticks were found at UW-Madison’s Lakeshore Preserve; the city parks of Cherokee Marsh and Sandburg Woods; and Pheasant Branch Conservancy in Middleton. A search at Madison’s Owen Conservation Park found none.
This year, teams will look for hotspots to target next year with insecticide-treated cotton balls — bait for the white-footed mouse, a main carrier for deer ticks. When mice use the cotton balls to make nests, the insecticide kills ticks as they attach to the mice.
So far, none of the ticks found in Madison carried the Lyme bacterium, Borrelia burgdorferi. The statewide infection rate in ticks is 22 percent.
“It’s only a matter of time” before infected ticks are found in Madison, Paskewitz said. “People have to think more about the possibility of being exposed right on their properties.”

Houtman, a chemical engineer at the Forest Products Laboratory in Madison, said he is potentially exposed to deer ticks each spring when he works in the woods at Camp Woodbrooke, which he helps run.
He first got sick shortly after Memorial Day in 2008, then again in 2009 and 2010. Each time, a 10-day course of antibiotics took care of the disease.
In 2010, Houtman’s doctor started prescribing a preventive dose of antibiotics, to take if he is exposed to ticks. He hasn’t had the disease since.
Houtman said he and others at the camp trap mice and set out insecticide-treated cotton balls to reduce the risk to campers. No campers are known to have contracted Lyme, though two counselors did last year.
Being in or near any wooded area carries a risk, as Della Haugen knows from her ongoing struggle with Lyme.
A former photojournalist with WISC-TV (Ch. 3) in Madison, Haugen, 39, said she was in deer tick habitat while covering flooding in 2008 in Wisconsin Dells.
She developed flu-like symptoms and bruise-like markings that might be a different kind of Lyme-related rash. She found a tick in her bed but flushed it down the toilet before realizing it might be helpful to keep such evidence.
She tested negative for Lyme, and her doctor treated her for anemia.
Her symptoms worsened, causing her to miss work. She eventually persuaded her doctor to give her short-term antibiotics, which made her feel better for a while.
But the symptoms returned, including muscle spasms, difficulty concentrating, sensitivity to light, burning sensations and fatigue so bad she barely left her apartment.
After a rheumatologist suggested her problem was psychological, Haugen found Hoffmann, the Waupaca doctor. In fall 2009, he diagnosed her with Lyme and started her on antibiotics.
She took various combinations of the drugs, sometimes intravenously, until last December. She’s finally feeling better and runs the Madison Area Lyme Support Group.
“The pain is less but it’s still there,” she said.
Haugen and Jennifer Christie, of Green Bay, are among Hoffmann’s patients who said it seems like the state medical board targeted him for his treatment of Lyme.
The board suspended his license from November 2011 to May 2012, citing unspecified deficiencies in medical knowledge and practice standards. In 1997, the board first disciplined Hoffmann for treating a patient after drinking alcohol.
In an interview with the State Journal this month, Hoffmann declined to say if he thinks the board targeted him in 2011 for his treatment of Lyme.
He said he still gives antibiotics long term to chronic Lyme patients. “I treat aggressively if I feel there is a need for it,” he said.